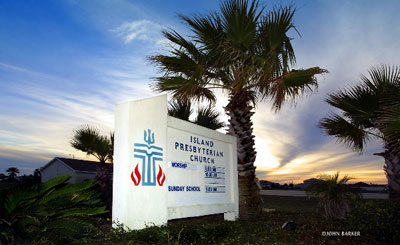 Kris was formerly a teacher at the secondary level, as well as an elementary teacher/principal in a three-room school on the prairie in North Dakota, before becoming an English professor at Fort Hays State University, in Western Kansas.

After 11 years at FHSU, a crisis of the Holy Spirit compelled her to train as a Certified Ruling Elder in the Presbytery of Northern Kansas, and then to become certified in interim ministry. Commissioned to a yoked congregation of Presbyterians and Methodists in central Kansas, she served for nine years before moving (upon husband Bruce’s retirement) to Corpus Christi. As she looked for a congregation to join, she fell in love with beach worship at Island PC, and became a member here.  Shortly after, she was called to serve the congregation of Alice 1st Presbyterian Church until they closed last December.

She is active in Mission Presbytery, presently co-moderating the Committee on Representation and Participation, serving on General Council, and working on a Commissioned Pastor Task Force. She has served as a commissioner to General Assembly twice and is a confessed “GA Junkie.” She writes a weekly column for the Island Moon and has several family connections known by this congregation—daughter Abigail also writes a column for the Island Moon newspaper (in which Kris figures regularly as “the Rev”), and son Josh’s boys Jovanni and Avery have attended Vacation Bible School at IPC for several summers (Josh, wife Kenia and the boys live in Germany). Their daughter Jess is majoring in chemistry, at the University of Kansas.

Kris’ position is one-half time, and she will be available in the office two days a week to visit. Please use her contact information from the home page to let her know your joys and concerns!

Scroll back to top